My problem with conspiracy theorists is the lack of objective conversations you can have with them. Yeah there might me a lot of truths you have in that story but there also happens to be a lot of untruths and it seems the problem is you can’t have an adult, objective conversation with out being accused of being part of the conspiracy. As I myself have experienced recently.

My experience has been with the Hampstead satanic abuse conspiracy. I am not going to go into the case in depth but for those that are not aware of it. A mother Ella Draper and her partner Abraham Christie accused the children’s father Ricky Dearman, members of the community, and teachers and parents from the local school of being involved with Satanic ritual abuse.  The court case actually happened last year but the usual restrictions where in place for the protection of the children. The children were placed in care for their own safety in September. (see time line below) So earlier this year the courts found that it was in fact the mother and partner that were guilty of crimes against the children and not those they were accusing.  Whilst the case for care was on going the mother dismissed her legal representative and started releasing the video’s. This was the biggest form of on line abuse of 2 children and others I have ever had to witness.

Within no time these accusations came to light after an incredible amount of videos, 16 in all, appeared on line of the children talking about the “abuse” that had been inflicted on them and others, these recorded on mobile phones whilst on holiday with the mother and boyfriend. These videos, to say the children had been schooled would be an understatement. They made me cry. 2 young children being filmed talking of things that they should have no understanding of, being questioned about murder of babies, cooking and eating and satanic sexual abuse. This was the child abuse ! This footage was the child abuse ! If the children had been abused then these conversations should be with a professional, if these children had been abused this was surely secondary abuse and could also create false memories of abuse.

So the online conspiracy heads went to town on this and the videos where getting millions of views. Court orders where taken out to get the videos removed and people kept on reuploading saying the story needed to get out. More abuse. At the time the video’s were released appeared Araya Soma who claimed to be helping the mother and released the names, addresses and telephone numbers of other children at the school saying they had been abused and their parents where also involved. This was all screen grabbed as I knew so many people listed and actually shaking with anger. And for questioning these posts being abused myself with such venom. I was considered a predator, an abuser or at the very least a facilitator for child abuse, just for daring to question such abuse. Religion, satanic abuse, children, tattoos, blood drinking, child sacrifice. All the ingredients were there in just the right quantity and it spread like wild fire but seemed more fitting for an Edgar Allen Poe novel.

So all of a sudden Hampstead was under siege. People were having shit posted to their house, phone calls where being made to people falsely accused of being abusing their children and the children themselves answering the phone calls. Strangers from all over the world were making contact with people in Hampstead and abusing them for being part of a so called Satanic abuse case.  The on line abuse became physical, mental and community abuse.

We were in lockdown. The police vans were parked outside our houses, outside the schools ( several schools where included in the accusations), outside the synagogue which is used by one of the schools, outside the church. Police walked up and down the streets. Neighbours had people come into earshot asking them if they have eaten babies. The local Church had baying conspiracy hecklers outside on a Sunday. The local church goers being abused and accused and not being allowed to go about freedom to practice their religion. And the police brought in to protect them and services disrupted by the likes of Christine Ann Sands Who claims to be “one of the chief organizers and one of the few public faces of Anonymous” with the  American evangelical style thrown in.

No longer do you hear children playing outside in the courtyards or outside their front doors as they did this time last year. Things have calmed down now but it’s on-going   The schools now hire private security guards who stand outside the school and walk the crocodile lines of children to the different buildings. We have children in our schools that think they need to be protected from these fanatical conspiracy heads. We look at people in the street and wonder if it’s one of them and await for some comment. The conspiracy cult who prefer to believe the most hideous heinous outlandish stories rather than the truth. Those that like repeating the story of the abuse so much you wonder what they are actually getting off on. Those that are facilitating the abuse of those children by carrying on the lie. There is the messiah complex with so many of these people promising to save the world from paedophiles, the illuminate and other secret societies. They seem to prey on naivety, uneducated and damaged survivors. They are predatory and abusive.

Only last night I took the dog for a walk and tucked under every windscreen wiper was a flier titled ” GOOGLE PAPA KILLS BABIES”  with the second line “THIS IS AN OFFICIAL GOVERNMENT WARNING TO ALL PARENTS”. They have actually printed the abuse claims in detail along with excerpts from the bible. The children’s pictures are all over the internet. More abuse and so on and so forth. So unfortunately for the dog our walk changed route and I removed every last one of those fliers and I will do again and again. 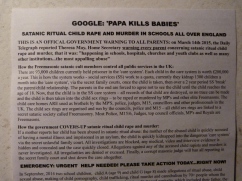 A note to whom ever…

Uk Column, Hampstead research, Belinda Mckenzie, Christine Ann Sands, Araya Soma and the like…….You don’t fucking belong here in Hampstead or anywhere. You are sick and twisted, you are the abusers. You have destroyed so many childhoods and yet you claim you are the saviours.  You are a disservice to any child that has been or is being abused. You are the enemy.

I don’t take too kindly to having police and private security patrolling my streets even less yourselves. You’ve had your 15 minutes of fame at the expense of innocent children,  now just fuck off.